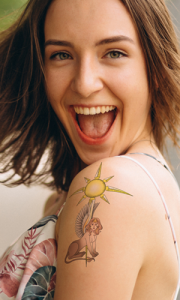 We humans love to adorn ourselves. Whether it’s jewelry or art we love to decorate our bodies.

It’s a fundamental human desire, and one of the oldest and most revered ways to do it is with tattoos.

The word tattoo comes from the Tahitian word ‘tatau’, which means to mark.

One of the most fascinating things about the history of tattoos is how ancient and widespread the practice is. Far from it being an isolated activity, there’s evidence of tattooing in virtually all cultures around the world; and it began much earlier than you might expect!

Did you know the earliest example of tattooing in the archaeological record comes from Otzi the Iceman?

Otzi is a mummified man discovered in the Otztal Alps, dating to between 3370 and 3100 BC. His skin is extensively tattooed with marks that experts believe may have served a spiritual purpose. Archaeologists have also uncovered tools which they believe were used in the practice of tattooing which pre-date even Otzi.

Otzi the Iceman is just one of many tattooed mummies which have been discovered around the world.

Some of the best examples come from ancient Egypt, where tattoos formed an important part of spiritual life. For example, women used tattoos as a form of glyph to protect from harm – namely the dangers associated with pregnancy and childbirth.

Tattoos weren’t just a protective measure. They were often the sign the wearer was of high status and worthy of protection.

In ancient Greece, Herodotus who wrote about the ancient people of Scythia and Thrace, noting that tattoos were “a mark of nobility, and not to have them was testimony of low birth”.

The Polynesians practiced tattooing, and it continues to be an important part of the cultural heritage of Oceania today. Here the extensive tattooing tells the story of the person’s life – it communicates the history, status and background of a person as well as indicating sexual maturity, achievements and beliefs. Symbols representing blessings and good omens were used as protection.

These were societies where ‘belonging’ was essential to life. Being part of a community and having value was crucial. Tattoos became an outward sign of this.

Much later, during the 18th century, tattoos in the West were associated with trades such as sailors and miners. The tattoos took on a protective quality. These professions were dangerous and the men often relied on teamwork and brotherhood to keep them safe and keep morale high. Tattoos of anchors or miner’s lamps were not only a good luck charm, but a bonding experience and an outward sign of belonging, and brotherhood.

The need for people to communicate who they were and what their status was is one that we can all relate to.

In the modern world, people often turn to material possessions to adorn their bodies and fill their lives. This is one way we tell the rest of the world who we are and what’s important to us, but it fails to share anything of our true selves.

Leaving material things aside, the physical process of marking the body can have a much more meaningful purpose; that of sharing something of our inner selves and confirming our spirituality. A tattoo is essentially a form of self-expression that transcends the material world and allows your own body to become a statement of expression and a work of art.

In today’s more secular world there’s an increasing emphasis on the personal spiritual journey of the individual. Many people are choosing to express their spirituality through the medium of body art. A tattoo is a lasting, visible reminder of a commitment to a belief.

So it’s a very old idea: to connect the physical body to the inner spiritual life.